February 1, 2021 2021-02-01T14:47:02+00:00
Monthly Review
We currently have 30 dogs in our care, 15 of whom are reserved. We had one flight during January for a total of 8 dogs, all of which had forever homes in place. Two dogs who were in UK foster also moved to their forever homes.
We are arranging two flights during February for a total of 15 dogs all of which are reserved.
We paid our outstanding Cyprus vet bill at a total cost of €3927. We donated €680 to help three pointers in the care of other Cyprus based rescue organisations, and we also donated 20 Apollo fleece jumpers and coats which are being sent out to Cyprus this month and will be used at the kennels for the dogs waiting to travel to the UK.
We received £1142.42 from the 2020 save a penny fundraiser, £150 from Lottie Long Legs card sales, £250 from Nina’s numbers fundraiser, and £1620 in general donations. We also began the Apollo Recycle a gift auction which runs until the 9th February.
We welcomed 550 new members to our three groups (Rehoming Cyprus Pointers, Apollo’s Angels and Apollo’s Angels Events). There were a total of 43,057 posts, comments and reactions in those three groups during January.
With effect from 1st February 2021, we have increased our adoption fees to £795 for adult neutered dogs adopted direct from Cyprus, £695 for un-neutered puppies and £500 for dogs in UK foster.
The next summary will be the 1st March.
Monthly Review – December, 2020: Previous 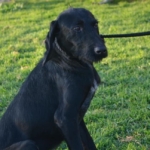