July 1, 2022 2022-07-01T09:13:17+00:00
Monthly Review
This is the summary of what our groups have been involved with during June 2022.
We currently have 33 dogs in our care, of whom 10 are reserved.
We had one flight 12 June for 15 dogs, 6 of whom had forever homes in place. 9 dogs were placed in foster homes and 8 of them have now been rehomed. Two dogs we originally rehomed several years ago became available again due to changes in their respective family’s circumstances and we are in the process of finding new homes for them. Our next flight is 7 July for 4 dogs all of whom have forever homes in place. We also have another flight 24 July and are currently arranging which dogs will be travelling on that date.
We paid our outstanding Cyprus kennel and vet fees which totalled 9923 euros and donated £150 to The Gonyeli Shelter and £311.83 to help three pointers in the care of other Cyprus rescue organisations. We also spent 300 euros on crate returns.
We received a total of £3236 from Nicola’s raffle and donations for Maude, £450 from Nicola’s mini raffle, £220 from Jan’s bonus ball fundraisers, £50 from Ashcroft Animal Accessories, £4 from Lisa’s pocket pouch sales, £184.20 from Paralimni Pound which were donations they had received for Nemo, and £85 in general donations.
We also received £200 from Sarah Walker who is currently sponsoring Reece for us, and £200 from Sue Hall who is sponsoring Cupra.
We began our 2022 photo competition this month and all the winning entries will feature in our 2023 calendar.
We will also be starting the Apollo Auction later this month. If anyone has items they would like to donate to the auction please contact Tracy Payne.
The June winner of the monthly draw who wins a Christine Cummings ceramic sculpture in our Pay It Forward fundraising event will be announced later today.
Across our three facebook groups (Rehoming Cyprus Pointers, Apollo’s Angels and Apollo’s Angels Events) 359 new members joined and there were a total of 48,313 posts, comments and reactions during June.
The next summary will be posted 1st August.
Dylan Previous 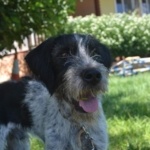 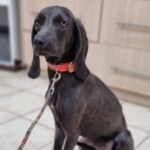