August 4, 2021 2021-08-04T07:20:12+00:00
Monthly Review
This is the summary of what our groups have been involved with during July 2021.
We currently have 26 dogs in our care, of whom 13 are reserved.
We had one flight 11 July for 8 dogs 6 of whom had forever homes in place, the remaining 2 dogs went into UK foster and one of those has now been rehomed.
Our next flight will be 22 August for 14 dogs, 12 of which have homes in place and 2 will be going into foster.
We donated £102 to help one pointer in the care of another Cyprus based rescue organisation. We also paid our outstanding Cyprus vet and kennel bills the total of which was 6091 euros. We also returned a large quantity of travel crates to Cyprus at a total cost of £580.
We received £3193 from the Apollo 8 yr Anniversary Auction, £200 from Nicola’s scratch card fundraiser for Alfie, £100 from Nicola’s card sales, £275 from Nina’s Bonus ball fundraisers, £5 from Ashcroft Animal Accessories, £14.26 from Susan Swailes clothes sale and £293 in general donations. Paul Williamson also began a Fantasy Football League fundraiser.
The July winner of the monthly draw who wins a Christine Cummings ceramic sculpture in our Pay It Forward fundraising event is Julie Corrie.
Our annual photo competition ends 1st August. The winning entries from it will feature in our 2022 calendar which will go on sale later this year along with three new Christmas card designs.
We welcomed 357 new members to our three groups (Rehoming Cyprus Pointers, Apollo’s Angels and Apollo’s Angels Events). There were a total of 41,173 posts, comments and reactions in those three groups during July.
The next summary will be posted 1st September.
Mocha – Reserved Subject to Home Check Previous 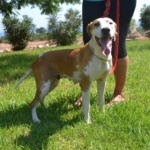 Sara – Under Assesment Next 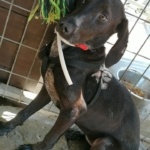